We had to drive a little farther this year for the Jensen East meet, after having it conveniently located in Monroe, WI last year (only a 3 hour drive from home).  The 2015 Jensen East meet was in Rhinebeck, NY, not all that far from the big city.   But, having been hooked last year, we couldn’t very well NOT go.  So, we loaded up Ms. J on her chariot and made the big drive.

First rest stop in Indiana.  Doesn’t she look comfy on her trailer?  The hardtop you see is the one that came with her (since replaced with a much nicer one) but we figured we’d bring it along and donate it to the auction. 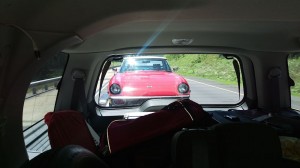 A lovely collection of Jensen Healeys, a few Interceptors, and one CV8 all lined up in front of the Vanderbilt mansion. 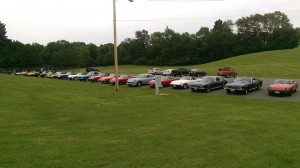 And another shot of many, many Jensens at the barbecue and Jarts tournament.

Well, got my voltage stabilizers from Moss Motors, pulled the dash apart again, and got one installed, and my gauges are now working properly once again (though the speedo is a little jumpy, just ordered a new speedo cable from Greg since I’m pretty sure that’s the problem). Good to know how much fuel I have in the tank again. That being resolved, I moved on to installing the Madera Concepts woodwork that arrived on Friday. First order of business, after pulling the gauge pod out once again, was to finally “fix” the trip odometer reset cable. In the process of pulling the gauge pod out multiple times, I managed to break off the little plastic tabs that hold it to the back of the speedo. After trying a few different solutions involving silicone glue, I finally cut a piece out of a PVC electrical switch box, drilled a couple of strategically placed holes, and here’s the result. Not pretty, but at least the cable can’t come out, and it’s not like anyone is going to assume the Lotus position to see it:

Now that that’s fixed, I moved on to getting the woodwork installed. That actually went pretty well, didn’t have to do any customizing other than making the hole for the hazard light switch a little thinner (it’s not the original switch, and the panel was just too thick for it to mount properly). The one concern, which I spent way too much time trying to fix, is that the gauge pod doesn’t sit flush with the opening in the dash (compounded by the fact that there’s a Delta dash cap installed by the PO over it). I had the opportunity to look at another JH this weekend at a show, and I noticed his was the same… when the top of the pod is flush, the bottom is actually recessed into the dash about a quarter to half inch. Anyway, after obsessing about it, removing the dash cap (and finding out why it’s there, her original dash is pretty cracked), bending the spike around on the gauge pod, and generally trying several different ways to make the pod fit flush, I finally gave up, went to bed, and the next day pulled the pod out and mounted the wood to it and just shoved it in, hoping for the best. It actually came out just fine, and I could have saved myself about 3 hours of work if I would have just done that in the first place.

Her interior is completely transformed.  For the woodophiles (?) the woodwork is a Carpathian Elm Burl (I had to look it up to see what it was, but all I know is it looks great).