Ms. Jenavieve is off the road for the winter, and she’s in her winter home at our British car clubhouse on a hoist.  One of this winter’s projects: pull her engine for a new rear main seal and other general engine stuff.   Since she turned back to all zeros (apparently they didn’t plan on these cars going past 100,000 miles) I figured this was a good time to see what I can do about getting another several years out of her.

So, her engine came out last weekend without too much hassle and is now sitting on/strapped to a workbench I built just for the occasion, since it became pretty obvious that I wasn’t going to get at the rear main seal too easily while the engine was on a stand. 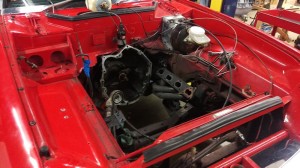 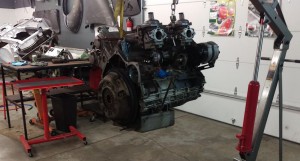 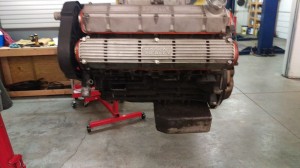 It’s a gunky, goopy, oily mess, as expected. The inside of the bell housing is covered in oil and gunk (though the clutch and flywheel are surprisingly clean). To pull the engine, the approach I took was to unbolt the exhaust manifold from the engine (MUCH easier when the car is up in the air on a hoist, I have to say) and then lift the engine up and out, leaving the manifold in the car (since the entire exhaust system is welded together, there was no easy way to separate the manifold from the rest of the exhaust). We’ll see how much luck I have getting it back together when the engine goes back in… I’ll cross that bridge when I come to it.

The first order of business was to wheel the picker outside with her engine swaying from it, to soak the engine in degreaser and power wash as best I could.  Once that was done, and after the clutch and flywheel were removed, onto the bench it went.

The short term goal at this point is to get the new rear main seal installed, and then I can put the engine properly on an engine stand for further work. To that end, I ordered the upper and lower gasket sets from Greg at JHPS today. I’m not convinced I will go far enough into the engine to need all of them, but if I ordered just what I thought I was going to use my luck would be that I’d miss the one that would hold up the project while waiting for it to arrive.