Finally got some news from the radiator shop. They did in fact find leaks in my gas tank! Funny that it makes me happy. Anyway, the sealing is happening now and I will be picking it up either tonight or tomorrow. It can wait a few days as I have to reassemble the doors with all the rubber parts and push fixes that arrived from Delta yesterday, and I suspect that is going to take me a while.

As long as I don’t ding things up too much putting the doors back on, anyway. Doors are curing in the garage after primer yesterday and paint today.

Now the fun begins. Gas tank is *supposed* to be ready tomorrow. Doors are painted. Nothing holding me back from reassembly except, well, me. I am going to wait with the doors until I get my order from Delta, since there are a number of parts (gaskets, window wipes and various push fixes) that I figure will be easier to deal with with the doors still removed from the car. Hoping they arrive in the next couple of days.

Oh, and no go on the front bumper stainless. The “expert” figured once he saw it that it would be closer to $400 to $450, and he’s not even guaranteeing that it will be perfect. Delta can get a new one from England for $550. If I’m going to spend that much, I’d rather pay the extra for one that I know will be perfect. It’ll wait for now, not a huge priority.

Next weekend is looking like a distinct possibility for completion… at least the weather will be lousy all week so I won’t be looking outside thinking “wish I could take her out and drive her”, but those days will be coming soon. I now have (once I get the gas tank back) everything I need to finish, except for the JHPS club store performance exhaust system which I’ve been waiting to do till last (didn’t want to have to worry about getting paint on it). Once she’s together and verified running and driving, then the exhaust gets ordered.

Had a bit of a family emergency, so I’ve been lax for a week or so. Back at it.

From a paint perspective, all that’s left is the doors. As predicted: a joy to disassemble. Spent most of Saturday afternoon on them, and after about 2 1/2 hours on the drivers side door, the passenger side only took about a half hour. The big puzzle was how to remove the fixed triangle window and attached window guidetrack. I finally figured out that the easiest way was to remove the back guidetrack first so that the window pane wasn’t so tight against the front one. The rivets that hold the bottom of the triangular frame to the rest of the assembly seem to have given up the ghost on the drivers side (nothing really holding them in place) so I’ll have to address that before the reassembly. Worst case scenario is that I use the one from my doors from my parts car, but I’m trying really hard to keep those intact for future use by either myself or someone else.

Question: did Jensen have elves on the payroll to mount the door handles? Getting them removed wasn’t easy to say the least, and I am not looking forward to trying to reassemble them after the paint is done. Is there a special tool or something to loosen/tighten the bolts? Accessing everything through the opening on the interior of the door is painful to say the least.

Anyway, hit the doors good with the Zinsser paint stripper on Sunday and scraped off about 2/3 of the existing paint layers. At this point I think I’ll move on to the stripping wheel on the grinder to finish them up tonight or tomorrow (waiting for it to stop raining so I can do it outside and not add any more pink dust to the garage).

Also, now that I have officially disassembled everything there is to disassemble during this project, I called Delta with my laundry list of “stuff” that is either missing, broken, or basically useless. Mostly rubber pieces to replace the rock hard ones I removed (or broke in the process) such as the interior and exterior window wipes, the door seals, door handle gaskets, etc. and lots of push fixes for badges and trim.

My body shop friend took the front bumper stainless panel and is going to sub it out to his English wheel/metalworking expert to work out the dents. He seemed pretty confident that he could get it really close to original, and for the $150 he’s going to charge it seems well worth it as I don’t think I could replace it for that, even if I could find one in the first place.

Oh, and my gas tank should be done in the next couple of days.

I *think* I’m still on target.

So, I have this big box of parts removed during the reassembly, and it’s time to sort through and find what I need to put her back together, right? Here’s where I see how organized I was with my Ziploc bags.

First order of business, after a cleanup and respray, was to remove the K&N filters from the Strombergs and reassemble the original airbox and filter assembly.  Used a high temp ceramic engine enamel to respray the “muffler”. It’s a little shinier than it probably should be, but it’s somewhat close to the original gray. Now, I’ve been doing some perusing of the archives here about the way it should all be put together, especially with the crankcase ventilation. What the DPO had done was to remove the factory airbox, install the two K&N pancakes, and just shove a little K&N filter into the hose coming from the crankcase and just leave it stubbed like that. From what I’ve read here, there doesn’t seem to be a whole lot of advantage to reconnecting it, so I am thinking of just leaving that is and plugging the port on the airbox that the hose is supposed to connect to. Unless someone tells me that’s a bad idea.

Then, I temporarily hung the fenders on the drivers side just to see how she looked: 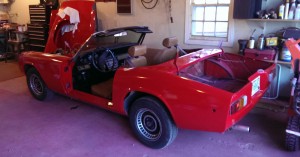 It makes me feel better to see the fenders in place, you know?

On to the re-bolting of the front fenders. Brett wasn’t kidding about “getting everything to line up”. The front passenger side is mostly on now, though I am thinking that I am going to replace all the fasteners instead of fighting with the old ones. Hoping that tonight I can finish that, get the drivers side fender mounted too, reattach the sugar scoops, and *maybe* see about remounting the hood/bonnet. It all has to be done, and it will do my heart good to see the front end complete.

Still haven’t heard from the radiator shop, so no idea when I’ll have my gas tank back. Getting anxious.

Another milestone, got the rotors and drums replaced. New rear brake hose. New pads and shoes. All bled out and the brakes *seem* to be good now (can’t exactly take her out to road test her right now but the pedal is nice and firm).

I’ll be curious to see if I got my pressure differential switch recentered as part of this… my brake warning light has been on for over a year.

On to the reassembly of the body!