Not an intentional part of the project, but just when things are going well, Lord Lucas strikes again (though it’s technically a mechanical issue, not an electrical one).

Went to a car show about a half hour from home on Sunday, one of the typical shows in the area (meaning that if your car wasn’t built in Detroit, very few people are interested). Still, it’s a good way to kill a day. Anyway, as we arrived, I noticed a new, interesting, and not very good sound coming from under the bonnet. Consistent with engine speed, kind of a scraping sound. “This can’t be good”…

After we got parked and registered and all that, I popped the bonnet (because you can’t show a car with it closed, that’s just wrong!) and took a quick peek under there… didn’t see anything obviously amiss. After a couple of hours I decided to look further into it. Started her up, listened while walking around trying to pinpoint where the scraping was coming from, and zoned in on the alternator. Turns out that the alternator fan was just barely touching the alternator body. Hmm. Guess I tightened the belt too tight a couple of weeks ago?

So, now that I know the engine isn’t going to blow up, we enjoyed the rest of the show and then drove her home. Nothing out of the ordinary other than that scraping sound. Once home, I pulled the alternator out (it’s the Lucas alternator) and took it to the bench, and it appears that the shaft is slightly bent… there is a noticable wobble to the pulley and fan when they spin, though the bearing seem tight enough (which wasn’t what I was expecting to find, figured it was loose bearings).

Did a little forum reading, tried a couple of the shops like O’Reillys and Auto Zone, trying to find a single wire Delco 10si (since that seems to be the non-Lucas replacement of choice) with no luck. Then this morning, made a call to Mike at Delta just for comparison’s sake, and as luck would have it he had a Lucas 14037-HD, brand new, in stock. Apparently the “HD” means heavy duty, it’s rated for 63 amps instead of 43, but he found no reason that it wouldn’t be a direct replacement. So, I went ahead and ordered it along with a new plug kit since I haven’t had the original plug in years (I replaced the connectors right when I first got the car with crimp on female spades just to get her going) and should be back up and running later this week. Maybe the new larger capacity alternator will actually be able to keep up to the headlights.

I decided it was time to see about the rocker switches I recently pulled off of Blue J. I spent a few hours disassembling, cleaning, and reassembling the headlight, hazard, and fan switches that I pulled, and they are now in Ms. Jenavieve replacing the ones that were in there. None of hers were original: the hazard and fan switches were the squarer, sharp-edged replacements that Delta had a while back, while the headlight switch was just a SPST rocker that I found at the hardware store. Now they are back to original.

Next step is to see if I can rehabilitate the turn signal/wiper switch from the parts car (Ms. Jenavieve has the MGB turn signal switch) to get even further back to original… the switches seem to function fine as far as I can tell, but the mounting collar is cracked so I’ll have to see if I can JBWeld it or whatever. Oh, and I think the dash from Blue J will be going in as well (I really don’t like the Delta dash cap that Ms. Jenavieve has, and removing it is not an option since her dash is really in bad shape). The dash from the parts car has one small crack by one of the defroster vents but is otherwise pretty much perfect. No big hurry, though.

After some time just enjoying the summer, got quite a bit done on Ms. Jenavieve this weekend.

First order of business was to revisit the whole steering shaft/motor mount issue from this past spring when I replaced her header with the Delta 4 into 1 header. I’ve never been happy with the way it turned out and since I had some time, I decided to take my time and try different approaches to get it right.

The problem was that when I installed the header, I could not find that perfect point where the steering shaft didn’t contact one header pipe or another where it passed through. It was hitting pretty hard on the right side at a half turn of the wheel, so I proceeded to make some shims out of large washers (notched to slide on easily) and shim the left side of the engine as suggested. Problem was, in order to get the shaft to stop contacting on the right side pipe, I had to raise the engine so high that the shaft started contacting the pipe to the left at about a quarter turn to the left, while just barely touching the pipe to the right.

Wow, that was hard to explain… but if you’ve done this you know what I’m talking about.

Anyway, at 9 washers (a little over half an inch of shim) I called it as good as it was going to get and that’s the way it’s been the past few months. The engine was way too high for my taste, in fact I had to remove the cam belt guard since it was hitting the bonnet. And finally, this weekend, I got back to it. This time I wasn’t in so much of a hurry (I had the whole header and exhaust issue to deal with back then) and I decided to take my time and explore all my options.

I spent a couple of hours pulling shims out, putting them back in one at a time, taking careful note of how it affected the steering shaft interference. What I finally figured out is that (and this was exactly the opposite of how I thought it worked) “shortening” the steering shaft (by collapsing the upper U-joint) actually gives the shaft less lateral movement. I thought straightening it out and making it longer would make it “smaller” in the turn radius, but that’s apparently not how it works at all. So, I loosened up the lower pinch bolt, slid the shaft to its “shortest” point, and it made a huge difference. I was able to go from the 9 shim washers I had all the way down to 4 (a little less than a quarter inch) and now there is no interference at all (though it’s still awful close). Much, much better.

Having done this, I reinstalled the upper cam belt guard, since it fits right now, and then decided it was time for an oil and filter change, which went as uneventfully as oil changes go.

I’m getting pretty good at this disassembly process when it comes to Jensen Healeys, having done 3 of them now.  Blue J went off to the crusher yesterday, or what was left of her: 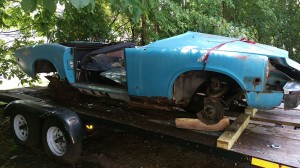 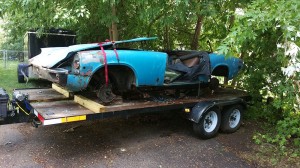 Not a whole lot left, huh?

But, the booty that was scavenged first will be useful either to me or someone else… 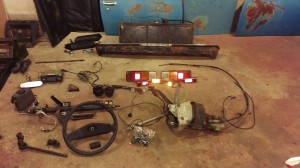 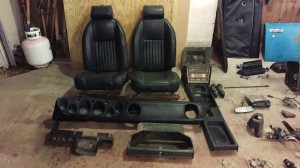 Ben and I drove across the state to the beautiful burg of Hudson, WI (way across the state, one mile farther and we would have been in Minnesota) for the Brit Fest Vintage British Car Show put on by the Minnesota MG group.  About 70 nice British cars, including another Jensen Healey! 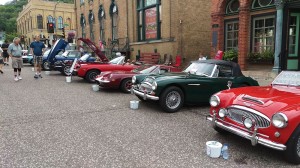 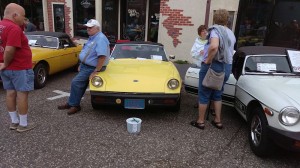 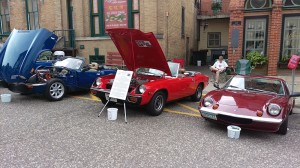 Also finally got to meet and chat with Tim Engel, better known as the Lotus guru.  We were parked right next to his burgundy Europa.